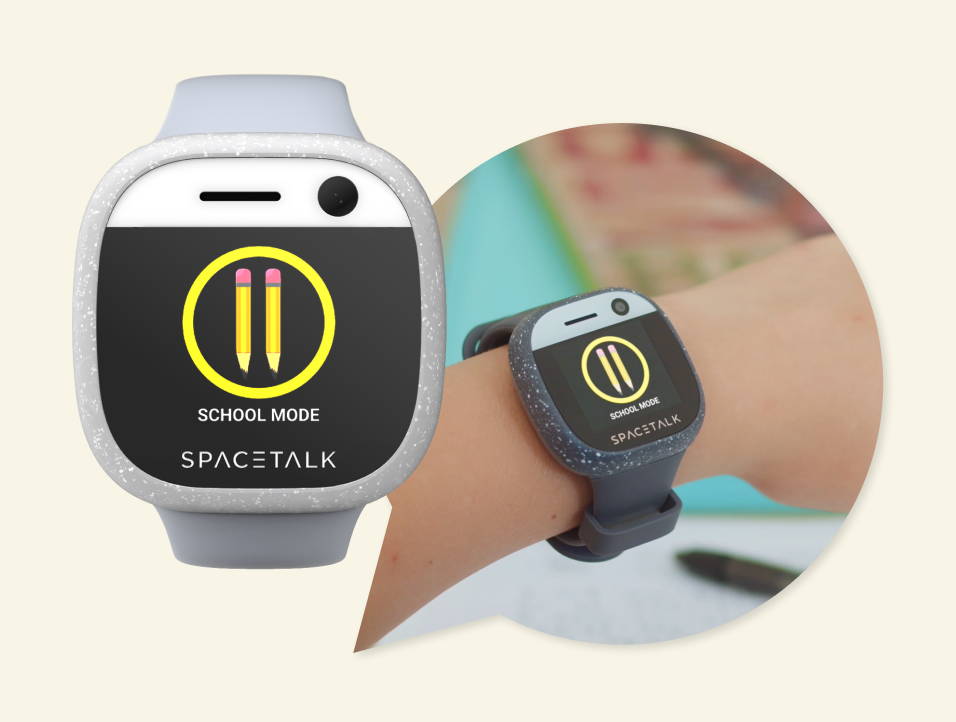 This popular feature lets you limit features on your child's device during school hours for distraction-free learning.

What is School Mode?

Keeping kids safe on the way to school—and focused in school.
Everyone wants to create a safe, learning-focused environment for students—that’s why many schools are banning mobile phones that distract from classwork and might even enable bullying.

We designed the Spacetalk smartwatch phone specifically to address these issues, with no internet—and none of the distractions created by smartphones and smartwatches designed for adults.

We hope this information will enable you to have an informed discussion with parents about shared responsibility for child safety and the appropriate use of technology in schools.

Spacetalk is a school-ready wearable safety device developed in Australia specifically to keep kids aged 5-12 protected and connected with their families. Spacetalk provides a high-quality phone, SOS alert service and GPS locator within a wristwatch sized device. Parents have full control over all features, including who can contact their child.

No! Our designers and developers have focused completely on child safety and that includes leaving out features that can put children at risk.

What is School Mode?

School Mode is a unique Spacetalk feature, designed for school use and any occasion when children are away from home. Parents and guardians use School Mode remotely to define the features that should be switched on or off on the device during set times such as classroom periods.

How does School Mode work?

Parents use the Spacetalk App to select which watch functions to disable during school hours or set times. For instance, you can switch off/on incoming and outgoing calls, messaging, step counter, location and stopwatch.

Unlike smart phones, Spacetalk in School Mode behaves just like a wristwatch. In School Mode, parents have complete control, without distracting their child or disturbing classroom activities.

How does the teacher know when Spacetalk is in School Mode?

Teachers can see that Spacetalk is in School Mode simply by looking at the screen – they will see two pencils side by side on the watch face.

Can my child use Spacetalk at school?

Spacetalk was designed for school use, especially for your child to wear to and from school.

Many schools have introduced bans on all smart devices due to the phone ban in schools, however Spacetalk has a School Mode which allows you to control the device remotely, transforming it into a simple wristwatch (which kids have been wearing to school for decades!). Only the parent controls Spacetalk School Mode to switch functions off during set times such as classroom periods.

What if I need to contact my child in an emergency, when the phone is in School Mode?

As a parent, you have complete control – you can quickly enable any feature to get in touch with your child quickly and directly.

My school has banned all smart devices. What can I do?

Each school has different guidelines and policies about what children can wear at school. If your school has a blanket ban on all smart devices, even when worn in School Mode, they usually provide a safe storage place during the school day.

How do I explain School Mode to my child’s teacher or School Principal?

But it’s important to know that Spacetalk is not like a mobile phone and is specifically designed for child safety. Even when phone and messages are enabled, there is no access to social media, apps or the internet – or unwelcome contact.

Its main function is to allow parents to know where their child is and for family members to get in touch in an emergency.

Spacetalk and the Spacetalk guardian app are the No. 1 kids’ smartwatch phone and app* in Australia, accredited by world leading cybersecurity experts** for best practice security, including authenticated and encrypted communications between subsystems and were launched in North America in November 2021.

Your privacy is our priority. The Spacetalk app, servers and software are all developed in Australia, ensuring everything is autdited, verified and passes all North American standards for privacy and data security and is never used for advertising or profiling.

**A team led by Dr Matthew Sorell of the University of Adelaide.

How do I activate School Mode?

School Mode is a feature activated in your Spacetalk app. To set up a new School Mode tap on the 'Home' button, then tap on the device. Tap on 'School Mode' then tap the + symbol located in the bottom right corner and enter your desired preferences.

Spacetalk is child safety device specifically developed in Australia with schools in mind. It incorporates a smart watch, cell phone, SOS function and GPS locator in a wristwatch sized device. Essential for school use, it also incorporates ‘School Mode’ to make it safe and distraction-free during school hours.

How does School Mode work?

Parents use the Spacetalk App to select which watch functions to disable during school hours or set times. For instance, you can switch off/on incoming and outgoing calls, messaging, step counter, location and stopwatch.

Unlike smart phones, Spacetalk in School Mode behaves just like a wristwatch. In School Mode, parents have complete control, without distracting their child or disturbing classroom activities.

How do I know when Spacetalk is in School Mode?

Teachers can see that Spacetalk is in School Mode instantly by looking at the screen – you will see two pencils side by side on the watch face.

Why do children need Spacetalk at school?

Spacetalk is currently used by thousands of Australian parents who want to provide their younger children with independence but still know that they are safe.

Feedback from parents shows that wearing Spacetalk reduces anxiety for both children and parents, especially if the child has a medical condition.

Rather than interrupting busy school staff, parents can message a child directly, for instance with a change of plan for school pickup.

Today’s parents are very tech-savvy and busy – Spacetalk is a natural fit with their lifestyle, without exposing their children to the risk of an internet-connected mobile phone. As a bonus, parents also tell us they can now allow their children the freedom to walk or cycle to school.

Cell phones are not safe for younger children to use as they expose the child to many risks, which have been identified by the researchers who initiated the cell phone bans*.

Spacetalk has none of these risks: no internet, apps or social media – meaning the device does not enable bullying, unwanted contact or sharing inappropriate contacts.

* Interestingly, the same child psychologist who led the report which prompted the ban – Dr Michael Carr-Gregg – has suggested schools implement a “dumbphone” policy, allowing phones without cameras or internet access to provide communication between students and caregivers.

How can I, as a teacher, manage the issue? All smart devices are included in our phone ban.

If your school has implemented a policy of ‘no smart devices’, it is likely that the decision was made to protect children and avoid classroom distraction. Spacetalk is a new category that allows the device to be worn as a wristwatch during school hours, yet immediately after school the parent can contact their child.

The way other schools are handling this is to make it clear in newsletters which devices have been banned, such as earbuds and smart phones. When referring to smart watches they have told parents:

If your child wears a smart watch & phone to school, you must provide a guarantee that it will be switched to ‘School Mode’ to disable all functions except the wristwatch during school hours.

How can a smart device prevent bullying?

The eSafety Commission reports that both bullying and cyber bullying are on the rise, with a concurrent increase in children reporting stress and mental health issues.

Facebook is viewed by parents as the worst social media enabler of bullying, followed by Snapchat and Instagram, according to our recent Parent Survey (link to Survey). Spacetalk removes the ability for children to be attacked online by removing access to all apps and the Internet. But more than that, Spacetalk also makes it easy for children to report to a trusted contact list if they are being bullied – before it becomes a chronic issue.

Children can only make and receive messages from the parent-controlled contact list. Any attempts for someone not on this list to reach the child will not succeed – but will be reported to the parent.

My school is also concernced about issues such as hacking and cyber safety - is Spacetalk secure?

Your privacy is our priority. The Spacetalk app, servers and software are all developed in Australia, ensuring everything is audited, verified and passes all North American standards for privacy and data security and is never used for advertising or profiling.

**A team led by Dr Matthew Sorell of the University of Adelaide.

Isn't Spacetalk just like Apple Watch and other smartwatches made for adults?

It’s what Spacetalk removes that makes it safe for Primary School use. Apple Watch and similar devices offer features such as apps and open access to the internet; the ability to call anyone and be called by anyone, with no parental control; and they have no School Mode or SOS emergency button. They also require the child to carry a separate phone, that also can’t be set to School Mode.